On Our Way to Prague

We decided to Lyft all the way to the airport instead of using BART. It is a long walk from BART to the San Francisco Airport where we would pick up the wheel chair assist. We watched our Lyft driver on the phone app make his way towards our house, only to see that he was stopped, for a long time, by the train. He finally arrived, we directed him through town to avoid another train. Traffic was a bit heavy, but we made it to SFO and the wheel chair assist kiosk, only to be told that several of the wheel chair pushers had just  even told to go for lunch and it would be about 25 minutes. We walked. Sore foot, ankle, toe and all.

It wasn't long before we were on our plane settling in for a flight of about 11 hours. Here I must confess our guilty pleasure of flying Business Class. It is outrageously expensive, but oh, so pleasant! We were treated to a drink... maybe it was two (three?) and a nice meal. 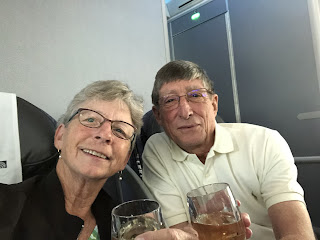 We settled down to sleep, without success. I knew I needed to get some rest, but it was only 5 or 6 pm according to my body.  I think I finally got in about an hour of sleep just as they began serving breakfast.

We landed in Munich and were greeted by Johannes, in lederhosen (it is the beginning of Octoberfest), and his wheel chair. He skillfully maneuvered through a rabbit warren of corridors and elevators. We took a brief ride on a handicap shuttle and were taken to a passport checkpoint. There were no other people there! We whisked through the process. That aspect of the wheelchair transport was amazing! If we had walked we would have been in line with everyone else on the plane. Shortly later we were on our way to Prague. 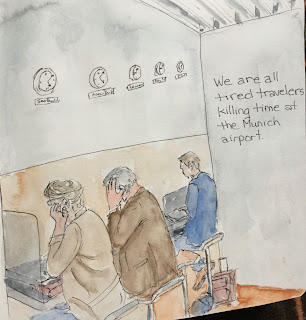 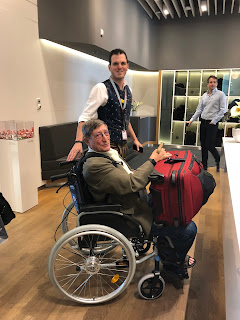 We caught a nap, far too short, before our first trip briefing, and then met with our friends for dinner.