Thelma & Louise (Without any bloodshed)

We left California in mid October (a few weeks early) to escape the smoke of the Napa fires. 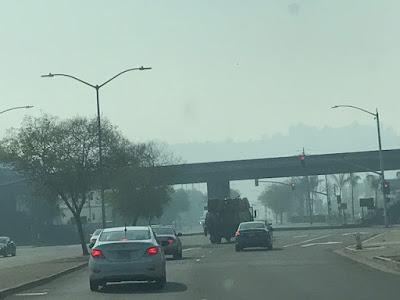 After just a few days in Florida, I flew back to Denver to visit my father, pick up my car and drive it to California to visit and provide some help for new grandson, Kellan.  Oh, and to unpack a bit more at our new house!

My BFF, Marjie, flew into Denver to travel with me.

Our adventure began with a delayed flight. Marjie was due in around noon. She called me to let me know she had landed in Cincinnati.
"Great!" I said.
"Not so great," Marjie said.
Her first stop was supposed to be Chicago!
Almost 12 hours later she landed in Denver. So, the start of our adventure was delayed a bit....
No big deal.
We had already decided that our trip would include stops at quilt shops along the way. Oh, no! It was Monday and the shop in Ft. Collins was closed! But... "QuiltEssentials" in Laramie, WY welcomed us. 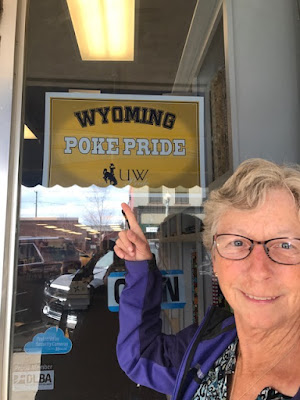 We bought a bit of this and a bit of that. As we left a few snowflakes were falling. Not a big deal. Just part of our adventure! And, to be an adventure, we needed more than a few snowflakes. We had a bit of a blizzard... only a small one... and since temperatures had been warm most of the snow melted. However, we did get an inch or two of slush as we drove further in the snow. 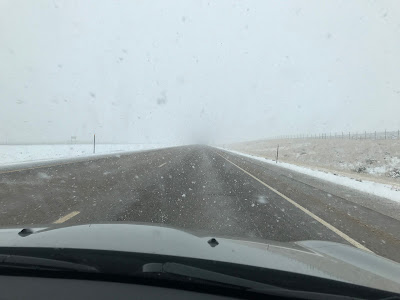 We arrived in Rock Springs, WY, had a quick dinner, and fell into bed..... only to wake at 4:30 AM since we were both on Eastern Standard Time. What the heck... we hit the road. This early morning wake-up call meant we missed a few quilt shops - it was only 8 AM when we arrived in the next largest city, Salt Lake City! Nope! No stores were open at that time.

We shared the driving responsibilities and Marjie enjoyed Whinny's "get up and go"! She was also in awe of the acres and acres of open territory we drove through.

I had tried to prepare Marjie for the salt flats. The flats extend about 50 miles from Salt Lake City to West Wendover, Nevada. The road is flat. The road is straight. And there is nothing to see (well, almost nothing) for miles. 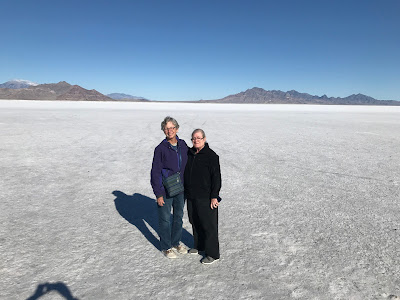 As we buzzed along in eastern Nevada the "Low Fuel" indicator beeped and lit up. What? We just had a half tank of fuel. How could we be low? The indicator said that we had 49 miles to go. Wells, NV, the next stop, was over 50 miles away. Oh crap! We motored on. I reduced our speed to 55 mph. We motored on. Later I remembered that the car had a "green" mode that uses less fuel. We motored on. All the while I'm looking at the "Miles to go" numbers as they creep lower and lower. What's the worse that could happen? We motored on. Finally signs appeared for Wells, NV... and FUEL! Hooray! We coasted into the first gas station and filled up, heaving a HUGE sigh of relief. 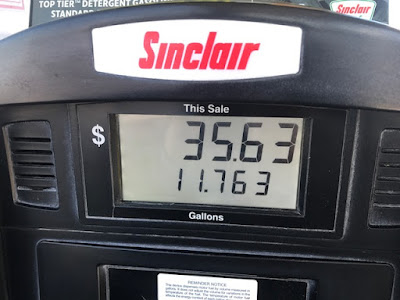 An online resource lists the fuel tank capacity at 11.6 gallons.

That was cutting it waaaayyy too close! But... it was an adventure that we will both remember for years!

So, on with our mission! We enjoyed visiting The Quilt Parlor in Battle Mountain, NV. And, of course, we added more to our stashes. 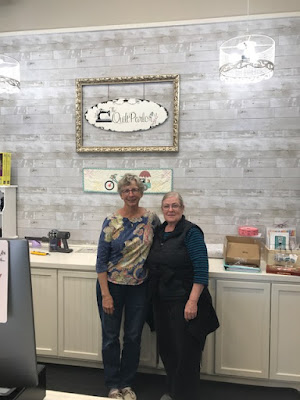 Then is was on to Citrus Heights, California and a stop at "Runs with Scissors". (Don't you love the name of the quilt shop?!) 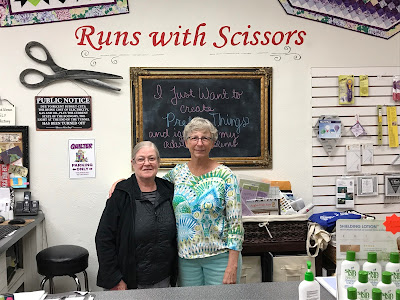 And then we were "there". Our first stop was at my son and daughter-in-law's house in Oakland to meet Kellan. Kellan was born on October 27. In this picture he is just under two weeks old. 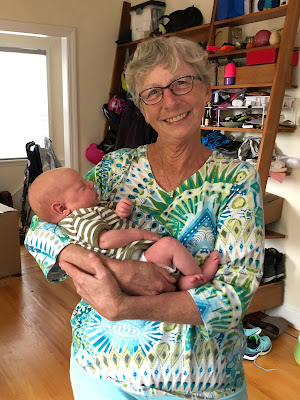 Our granddaughter was not immediately thrilled with her baby brother! But she is growing to love tolerate him!

Then it was on to our new house in California where the adventure continued as we unpacked boxes. The most important "find" was the track for my long arm sewing machine. I packed it with some paintings.... but which ones? 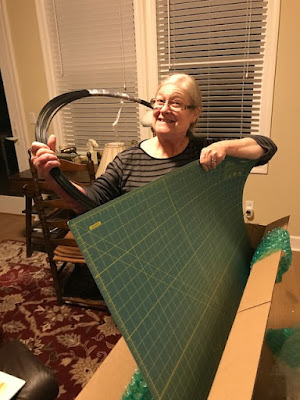 With Marjie's help we had the long arm machine assembled and running in about 4 hours. 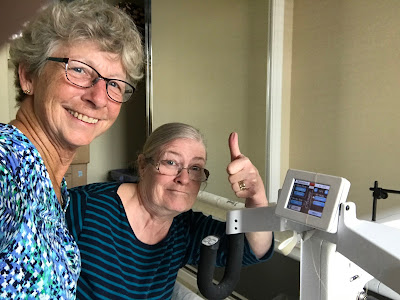 And "sew" the adventure came to an end, as all good things must. I took Marjie to the airport, where her flight home went without a hitch this time. I stayed on for a few more days of family and unpacking, and then returned to my new Florida home.