Things That Go Bump in the Night

Despite the fact that I am very visual and tactile-kinesthetic when it comes to learning ....sounds can drive me insane. The tapping of a pencil. The loud tick of a clock. A squeak in a fan. A rattle in our car.
Argghhhhh!

source
A few nights ago, while we were watching TV, I heard an intermittent gentle thump. "There? Did you hear it?" I asked my hubby.
"What?"
"That bump. Shhh. There! That sound."
"What sound? I didn't hear anything."
So I went on a sound hunt and hubby, thinking I was losing my marbles, went back to watching TV.
I went down in the basement. Sometimes our water tank gurgles. Maybe that was what I was hearing. I sat on the steps. I waited. Nothing. I couldn't hear the sound.
I came back to the living room. I waited. There. I heard the noise again. Tucker heard the noise. He went to the front door. So I followed. I went into the foyer. Yes. There was the sound. But it wasn't that much louder. Perhaps upstairs. Bump. The sound, again. But was it any louder? Where was it coming from? Outside? I came downstairs and went out on the front porch. I didn't hear the sound. Finally, I had to give up and I went to bed. I tried not to hear the sound. Good luck with that! I decided that it must be the screen on the French door in our bedroom. Tap, tap, tapping... while I nodded, nearly napping. `'Tis just the screen,' I muttered, `tapping at my chamber door - Only this, and nothing more.'
I finally drifted off to sleep.

Almost a week later the sound returned. Thump. Bump. Tucker and I looked at each other. I began to prowl around the house, ferreting out the origin of the noise. Downstairs. Upstairs. A little louder there. Outside... not so loud. But wait, it sounds like thin metal. Perhaps aluminum. I stepped off the stairs to examine the gutters and downspouts. The wind had picked up. Perhaps we had a loose section of downspout that was occasionally being blown into something. Nice try. Nothing. I heard the sound again. Definitely metallic. I stepped back further and examined the roof. And finally...ta daaaa! There it was. 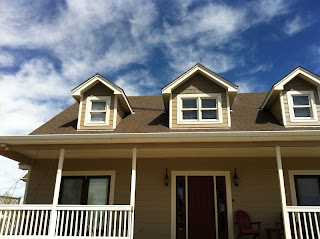 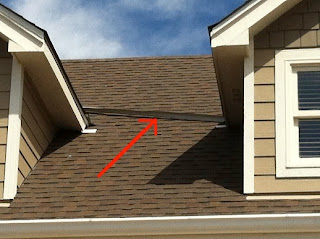 A piece of flashing had pulled out from under the edge of the roof of a dormer. It was caught on one end and the wind was occasionally blowing it, where it would thump against the roof, making the bumping noise that had been plaguing me. I climbed out the dormer window, retrieved the culprit and finally was able to have peace reign. You don't take me for an April fool, do you?
at April 01, 2012