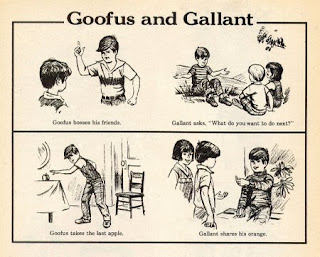 Remember these? Highlights Magazines were the only thing that made going to the dentist at all bearable when I was younger! Well, heck, I still like the hidden picture puzzles!

In thinking about my team I've realized that they should have been named Goofus and Gallant, for they truly epitomize the characters:


Goofus grabs huge hunks of hay, then tries to take more from Gallant.
Gallant chews his hay slowly and only gets mildly annoyed by Goofus' thievery.
Goofus pushes the stall door open and escapes into the barn if given the opportunity.
Gallant stands patiently in his stall, door open, while his owner brings in hay or water.
Goofus upsets the grooming bucket and mouths each tool.
Gallant stands for grooming, even if not tied.
Goofus paws with impatience and has been known to stamp his size 2 hoof to add an explanation point to his statement.
Gallant cocks one hip and waits ever so patiently.


Can you tell Goofus and Gallant apart? 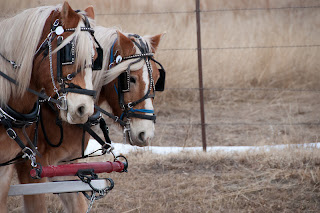