Our "specialist in equine hoof care" visited the boys recently. When it comes to my horses' feet I have total trust and confidence in this man. After all he walks on water! He marched right across the slick frozen puddle in front of the barn without falling. Doesn't that count?!

On his first visit, days after I bought (or was it rescued?) the team this past summer, he sat in his truck and shook his head in disbelief as viewed the condition of Pippin's feet... from a distance of 20 feet! He made some comment about the mess his feet were in as I led Pippin up to him. He won Pippin's heart in a nanosecond by proffering cookies as he studied his feet, in silence, from all angles. Although, since he had a pocket full of cookies it wasn't always easy for him to view the feet from all angles as Pippin kept turning to nuzzle the pocket for more goodies! After a period of silent reflection, he pronounced with his characteristic drawl, "Waaalllll, there's not much ah can do raht now but let them feet grow out a bit." He went on to say that, as I had already surmised, Pippin had foundered "bad, real bad" some time in the spring. 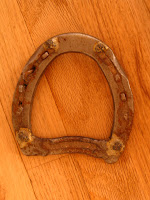 The shoes he sported were a bit curious having a bar welded to the heels of the shoe, which was cut from a piece of another shoe. We guessed that this was a jerry-rigged effort to make horsey orthopedic shoes, maybe to take pressure off the front of the hoof. Perhaps the installer (I hesitate to call him or her a farrier) fashioned the shoe, which had quarter clips as well, to try to limit hoof expansion and thus protect the hoof from further disintegration. It was evident from the rough, broken edges of the feet that Pippin had only recently been shod, with nails that found little purchase on the ragged walls of his hooves. His shoes were only hanging on by a wing and a prayer. In less than 2 weeks our wonderful farrier was back to replace a thrown shoe and anchor it with epoxy enriched hoof walls.

It has been six months. The epoxied area has grown out and the man is pleased! He pulled Pippin's hi 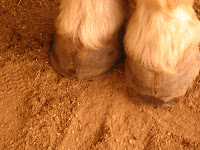 nd shoes in August and his front in December. Pippin's feet look so much better, with only some ugly cracks on the front as a reminder of the painful ordeal he faced last year. The abscessed area is just now becoming visible on the sole of his foot near his toes, a small oval area of darker material adjacent to the white line. I'll have to be careful about the terrain that I ride on and watch the wear as this weakened area begins to grow out. It could be that we will have to go back to front shoes for a period of time at some point in the next few months to support the thinner hoof wall until the damaged area completely grows out. 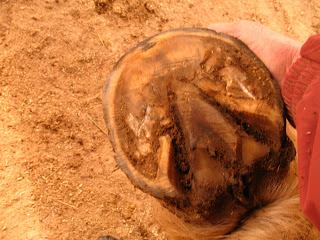 And what about Doc's feet? They are as far on the balance of hoof condition on the good side as Pippin's feet are on the bad! Hooray! One out of two ain't bad!