I think I am fortunate that we aren't the type who go out to dinner often. Cooking every night is an everyday thing for me, so unlike many of my friends, I am not struggling with quarantine cuisine during our "shelter in place" confinement. Sure, we've had our "I don't want to cook one more night" dinner of French Toast (on Easter Sunday no less!), but for the most part I manage to get something on our plates that is fairly nutritious and tasty. A few times since the lockdown began I have been inspired to go above and beyond, making do with what I have on hand. One night I became inspired to make lobster/crab fettuccine using leftovers from a Friday Night Date Night Take-Out seafood supper, a recent addition by our community eatery. My fettuccine began with a base of home made stock from lobster and crab shells and lots of other savory things. I served it on home made pasta. Oh, and it was delicious! This was something I had never made before. Thank God for the Internet and lots tons of recipes, with ratings, at one's fingertips... literally!


Most recently my inspired meal choice was Chicken Divan.

I've never had Chicken Divan. The idea came about from a conversation with my bff. She mentioned, with a fair bit of excitement,  that she was cooking it for dinner that evening. I mentioned that I had never had it before, and asked how she made it. She rattled off the recipe. It sounded tasty (who doesn't like gooey, melted cheese?) and I tucked it in the back of my brain.

Flash forward... well, in these times the days don't seem to flash... but suffice it to say... later, I decided to make the dish for dinner. I searched online to look at recipes and I also found the history of the dish.

Wikipedia tells me that: "Chicken Divan is a chicken casserole usually served with broccoli and Mornay sauce. It was named after the place of its invention, the Divan Parisien Restaurant in the New York City Chatham Hotel where it was served as the signature dish in the early twentieth century. Its creator was a chef named Lagasi."

I came across a link to the WORLD'S BEST Chicken Divan and stopped there. I'm glad I did! I read through the the blog post/recipe and began pulling out the ingredients. Because I can't go running off to the grocery store I made a few substitutions and changes, working with what I had on hand. I guess we all have similar limitations!

I certainly identified with New York Time's columnist, Sam Sifton's column entitled "Substitution City".  He wrote: "With everyone out of this pantry item or that one, recipes have become mere suggestions of where you might start. They’re like assembly charts from Ikea when you have only 60 percent of the fasteners."

The major substitution I made was using the broth from a can of chicken noodle soup, mixed with water, for the chicken broth and bouillon... and what the heck, I threw the noodles in the casserole as well. Knowing that canned soup tends to have a ton of salt in it, I did not add any other salt in my cooking.

The recipe link above has detailed instructions. Here is my "Cliffs Notes" version: 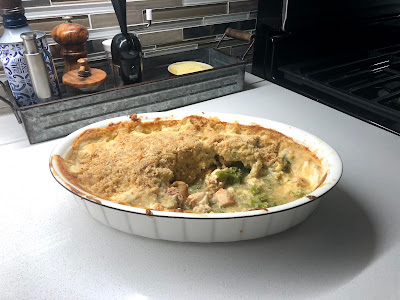 Just an aside....
this was posted on FaceBook. It was written by Haroon Rashid.
Wow... what a powerful message, putting us all in our places!

We fell asleep in one world, and woke up in another.
Suddenly Disney is out of magic.
Paris is no longer romantic,
New York doesn't stand up anymore,
the Chinese wall is no longer a fortress,
and Mecca is empty.
Hugs & kisses suddenly become weapons,
and not visiting parents & friends becomes an act of love.
Suddenly you realise that power, beauty & money are worthless,
and can't get you the oxygen you're fighting for.
The world continues its life and it is beautiful.
It only puts humans in cages.
I think it's sending us a message:
"You are not necessary.
The air, earth, water and sky without you are fine.
When you come back, remember that you are my guests.
Not my masters."
at April 29, 2020