I happened to stop by a Goodwill store to look for "art" that I could repurpose, either using the frame or repainting a canvas, or maybe, just maybe, finding "art" that I would want to hang on our immense expanse of wall that we have. (Our ceilings are all 10' high and we have lots of wall space.) I lucked out in that the Goodwill was having a 50% off sale, so I found a number of art pieces and was heading out the door when I spied a large wooden desk. 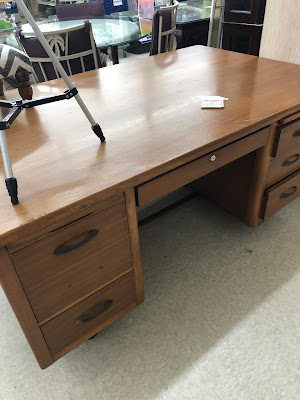 Hmmm, thought I, that could be a great sewing table. I went over to inspect the desk. It had a few dings and veneer chips... character one might call it! But otherwise, the piece was in good shape, and it was solid. Yup... it wasn't made the way furniture is now. This was all wood, and weighed a ton! And... I wanted it. Of course, the price was an incentive. The original price was listed as $14.99. So, I bought the desk for the kingly sum of $7.50!!! 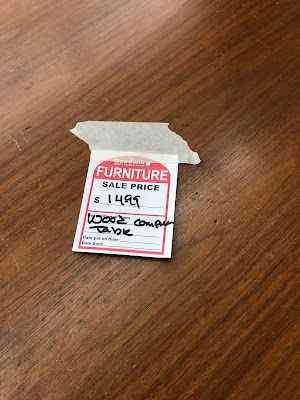 I went back the next day with the truck. The desk just fit in the truck's bed, with the tailgate down. It took four of us to heft that hunk of wood into the bed of the truck. I got the desk home and took out the drawers to lighten the load, and so I could clean them. We suckered an electrician who was giving us an estimate to help us get the desk off the truck and into the garage. Later, when our furniture arrived, we asked the fellas who had moved those pieces if they might possibly consider installing the desk in my sewing room. They obliged. 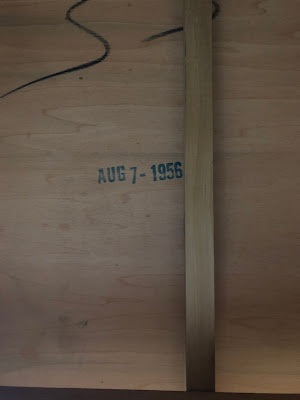 Based on a label in one of the drawers, the desk probably cost $140 when purchased at Galloways. 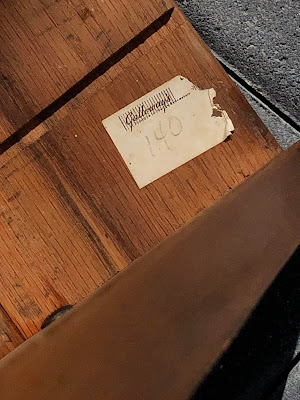 With just a smidge of research, I discovered that Ralph Galloway began an upholstery business in 1944 and began to specialize in Danish furniture. He eventually had six furniture stores on the Gulf coast of Florida, as well as one in Orlando. 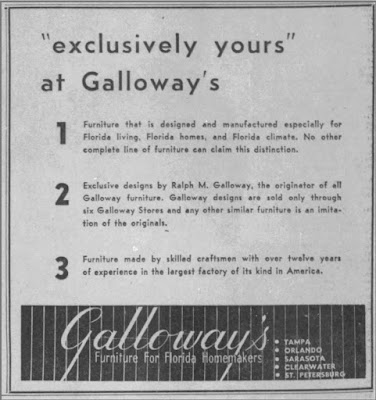 So, it was fun to find out a bit about my desk.

However, that is not the subject of this post. The desk is not broken. But, it is because of the desk that I hurt my toe!

Earlier I wrote that I had removed the drawers so I could clean them. I took the drawers out to the driveway with a container of soapy water and a scrub brush. I scrubbed each drawer, rinsed it, and positioned it in the sun to dry. At one point I walked into the garage. My feet were wet. The garage has one of those shiny finished floors. The floor was amazingly slippery with wet feet. I started doing an awkward split, with my left foot rapidly moving north, and my right beginning to head south. In some sort of valiant effort to remain standing I guess I twisted and my right foot slammed, toes down, onto the floor.

Yeouch! It hurt! I hopped around for a bit, spewing a string of expletives, and went about my task. Only a bit later, when it still hurt, I noticed how the end of the toe next to my big toe had turned rather black. And, a bit later, there was additional redness, some blue, and some swelling. I Googled "images of broken toe" and compared my toe to what I saw online. Hmmm... it could be broken! Next I checked with Dr. Google to see if one should see a Doctor about a suspected broken toe. I knew they usually can't do anything about it, but the Internet did say that it should be x-rayed to be certain nothing is out of line. So, off we went, later that afternoon, to a Convenient Care center for an x-ray.

The PA read the film and declared that I had, indeed, broken my toe. I had a closed fracture of the last joint of my second toe. I could even see the pie-shaped piece that had broken from the joint. The PA gave me a surgical shoe to wear and told me to follow up with a podiatrist. She also mentioned that a radiologist would read the x-rays and the results would be posted on "My Chart", an online interface for patients to keep track of their medical procedures, tests, appointments, etc. The next day the radiologist reported:

How wonderful to know that my big toe was not broken. However, as I explained in a note to the employee who posted the report, the second toe was the one in question, and perhaps a radiologist should take a look at that one.

Before the radiologist reported on reading the x-ray a second time I had an appointment for a general checkup with a PA in our new neighborhood medical center. I told her my story. She pulled up the x-rays, and agreed with the original diagnosis. The toe was fractured.

I have since visited a podiatrist to assure that the fracture remains "closed".  All is well, and the toe hasn't interfered with the enjoyment I find in sewing at my new desk! 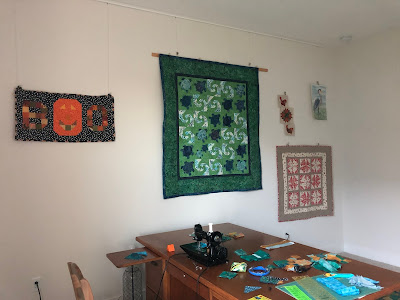