Stepping back in time a bit.... I flew into Denver to pick up my car, visit with my dad and then get a few odds and ends taken care of. Then I was heading to the airport to pick up my friend, a very good friend, who had agreed to meet me in Denver and accompany me on my drive to California. So you see why she is a very good friend? We had all kinds of adventures planned - most having to do with potty breaks near quilt shops!

Friend had a change of planes in Chicago. Chicago was fogged in and her flight was diverted to Cincinnati to wait. Other planes bound for Chicago were diverted to Cincinnati and other eastern airports. When it came time to leave for Chicago it seems that a few passengers had not made it back on the flight. They waited. After a roll call just like in elementary school where passengers raised their hands when their names were read, the plane was on its way. Far too late to make her connecting flight.

On my end, I had completed all of my errands and started toward the airport to meet the flight arriving around noon, plus “T”, an unknown amount of time. I knew about the stop in Cincinnati and knew that if, by any chance, the airline held her flight in Chicago, I might need to be nearby. In hindsight, I should have stayed on the other side of town as Murphy’s Law might come into play which would mean that her plane came in close to her scheduled time and I’d be late in picking her up! As it happened, after standing in line for ages, she was able to get a confirmed seat arriving at 10:05 PM that night. (I did look online to see if I could find anything but everything I saw said “sold out”.) We both figured arriving 11 hours late was a better outcome than what she heard from other passengers trying to get to other destinations, whose only option was arriving 36 hours later!

And so I waited. (Oh, and waited some more as her flight was delayed!)

I could go take a hike! 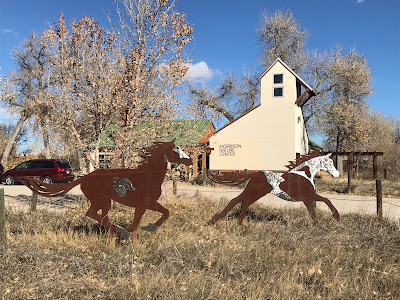 There was a park fairly close to the airport and the park connected to open space trails. Off I went. 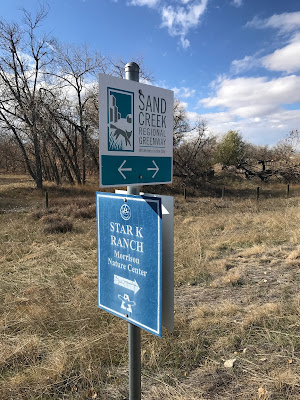 It was a beautiful sunny day with the crispness of a Colorado fall day. The trail ran along a plateau with side trails looping down to the river and back. 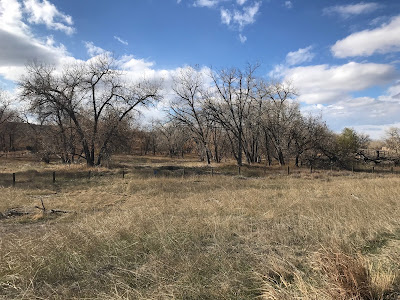 While walking along the river I noticed that the water was like a mirror. There didn’t seem to be any movement. I couldn’t even tell which way the water flowed. Then I noticed some trees where beavers had industriously worked at bringing the trees down. 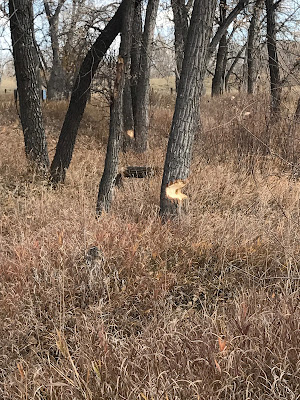 The beavers had tackled some huge trees. Finally I came across the beaver dam. That explained the lack of movement in the water! 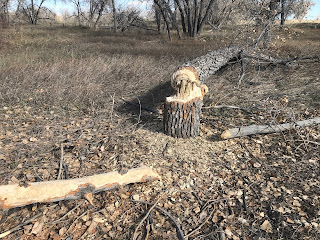 My walk was an enjoyable way to spend some of the hours waiting for my friend.
at December 09, 2017