We began planning a celebratory trip sometime back in the summer when we thought about what to do to commemorate 45 years of marriage. Forty-five years? How could that be possible?! We have taken three river cruises and have enjoyed them immensely. So, we selected to do a back-to- back cruise: one week in Paris cruising on the Seine, and  a second week in the Bordeaux region cruising on the Garonne and Dordogne rivers and the Gironde Estuary.

We arrived in Paris around 7:00 AM. We were whisked toward the city by a shuttle arranged for by Uniworld. Whisk may not be the operative word, since we were in morning rush hour traffic! But, how nice to not think about how to get from point A to point B and how nice not to have to struggle with my rusty translations of French - especially after a night on the plane and losing hours of sleep due to the miracles of jet travel.  We were met at the hotel by a Uniworld guide. Another blessing! Sylvie worked with the front desk to get us into a room before the 3:00 PM check-in. As I recall, we were both horizontal and sound asleep before noon. However, when 2:00 PM in Paris rolled around it was 6 AM at home and my eyes popped open. I left Mr. Dreamy to his dreams and went for a stroll around the Tuileries Gardens. Ah, mais oui, nous sommes en Paris! Voilà! Voilà!

The first afternoon remains a bit of a blur, as I knew it would. Marc and Ranee, friends of ours from Oregon, came in around 3 and we met other couples on the trip at a meeting with Sylvie that evening. She took us on a brief walking tour of the neighborhood and pointed out a few restaurants. We ate with new friends from Canada, came back to the hotel and fell in bed. Only to have our eyes pop open around 2 AM again! Body clocks are amazing in their accuracy! 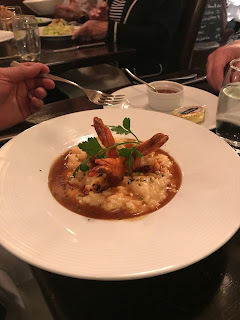