The house looks a bit different this week! 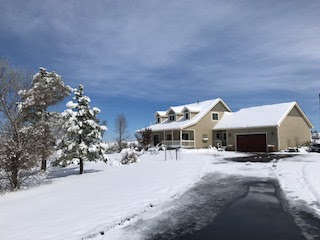 After visiting several estate sales last week we decided that we didn't care for the sales that were selling everything. Nice furniture and nice objects seemed to get lost in the clutter of crap. So, once we return from our trips we will have Saturday moving sales. Each week we can add more to the tables for the next week. Then, when we do have an estate sale only the better items will remain. The moving sales will also clear up space for the nicer items to reside when the house is staged. So, as I have been cleaning out and sorting items I have also been pricing some of them.

This week's accomplishments include: 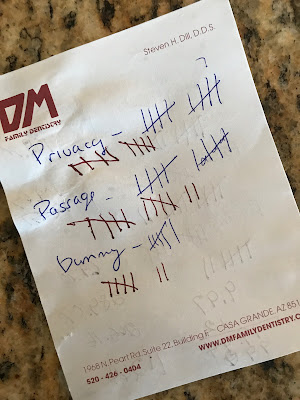 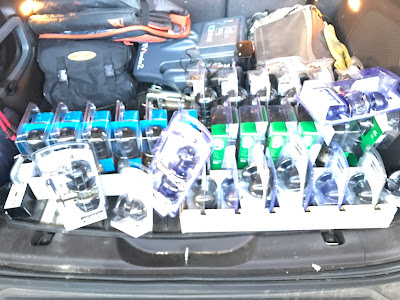 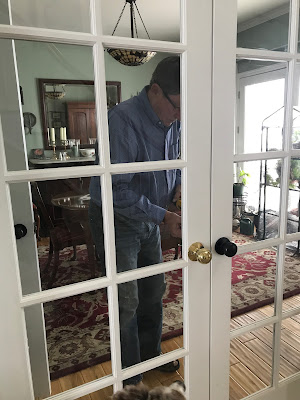 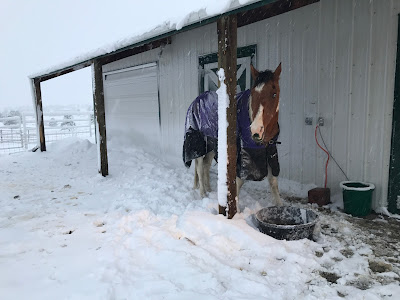 We have an RV rally with friends beginning on July 7. I am so hoping we can have the house go on the market that weekend. It would be so much easier if we were gone and didn't have to deal with day to day clean up and dog hair removal!!

Other things going on this week:

The snow made a lot more work, and now a lot more mess for me. The old horse, Malachi, (pictured above) is ostracized by the herd. I take him out to feed him extra goodies, and when I went to put him in, he ran away from the gate. He was clearly telling me he'd rather stay under the porch than chance being stuck out of the run-in in the wind and snow. He was shivering, so I blanketed him and let him stay. The next day he had ripped open his heel. He has continuing issues with that one heel. It was bleeding. He was clearly uncomfortable. So, Mr. Dreamy and I went down to the ranch supply store to get dressings and more food. We had burned through a lot during the storm and colder weather.

I barricaded the door between the stall and run-in by screwing some boards across the doorway and put Malachi in there, where I cleaned, dressed and wrapped his boo-boo. The dressing stayed in place. I had to remove it the next day after he was out in the snow. Now that the sun came up and it warmed up a tad, snow is melting and the paddock is pure mud. Evidently Ladybug doesn't care for mud, she pleaded with me to let her out into the yard!

The other huge event for the week was that Carol, my Dad's caregiver, dropped the bomb on us that she had a full-time job and would need to leave. She agreed to stay on for a reasonable amount of time while we found someone else or another agency. Finding caregivers who will put up with Judy, my stepmother, has been problematic. Judy is anal about how things should be done and I guess she screeches at caregivers if she doesn't like the way the do something. Carol had a great way of putting up with all that. For example, one day Carol was making jello and Judy, peering over her shoulder, said, "that's not the way I do it." Instead of entering into a set-to about it, Carol merely handed her the spoon and said, "Here, you finish it then." We have gone through so many caregivers in the last three years I can't even begin to count them. And, in most cases, I feel certain it's Judy's behavior that drives them away. They all say how much they like my dad, leaving the other side of the equation blank. So, damn, here we go again. Judy will get so uptight, people will come in and go because they can't put up with her, she will be even more critical as Carol has been amazing. While talking about options it was mentioned that perhaps it was time for Dad to go to Mill Vista, the assisted living and nursing facility on the campus of their current independent living apartment. Judy put her back up immediately, but Carol suggested they go look at it, and she could be there to observe and question care. Off they trotted, and came back with positive vibes. Judy took me over to see the facility and the room they picked out for Dad. We began the steps that would be necessary to move Dad to that facility. We all agreed that he would get great care there and Judy can stay by his side as much as she wants. This would also be a nice transition for Judy. First, she'd have less work at home, and with her shoulder injury that would be a good thing. Second, she could begin living all by herself again. No Dad. No caregivers. But, Dad would be there and she could visit him. It wouldn't be as much of a shock to her system as if he died. The plus is that Dad will have care 24 hours a day instead of 10 hours. So, I trotted back home. About 2 hours later I received a message from Carol. Apparently Judy had contacted a former caregiver, who is now in management, and she came by to visit. They began talking of Judy hiring another former caregiver and paying her under the table. What???!!! No. No. No! That's not going to happen! When I talked with Judy, about another subject, she told me of her thoughts. I told her of mine. For the time being things are still in motion for Dad to go to the facility. We'll see how the drama unfolds this coming week!

So day is done. Week by week we move forward, a little bit at a time, just like eating the proverbial elephant! 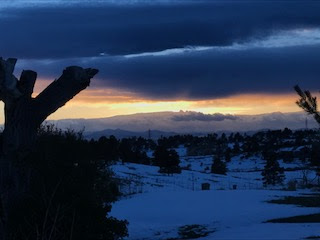