I haven't decided if this is really cool, or really creepy. The Science teacher in me says it is really cool.
But....
Last week I took the dogs down to the dog park for their evening potty break. I grabbed the miner's light flashlight and stuck it on my head instead of trying to wrestle leashes, doggy poop bags and flashlight as I usually do. As the dogs began their evening ritual of sniffing everywhere other dogs had been I noticed a sparkle from the dirt, oak leaves and the few sprigs of grass that have withstood being trampled by puppies. I walked closer. Oh God. No! It was a big brown spider. Bleech! I backed up and the light caught another sparkle. Another spider. There were sparkles all over. Dozens of them. Even more. (And there I stood in my sandals-shudder!) I grabbed the dogs and left the park, and of course had to look it up on the Internet. It seems that if you hold a flashlight up by your eyes, or as in my case, wear one strapped to your forehead, spider eyes will reflect the light directly back to your eyes.
I told Mr. Dreamy about it and he gave me one of those looks. You know, the "I don't believe you" sort of look. The "don't make such a big deal about nothing" look. So a few nights later (since I was still talking about the spiders in the park) he took the dogs out. He agreed that he saw the sparkles, and he confirmed they were from spiders, but he disagreed on the "dozens". He admitted to having seen "a few".
Tonight I took the dogs back to the park (having put on my sneakers first). The spiders were there, not in the numbers I saw before, but there none the less. Some of the spiders, upon closer inspection, had pea sized bodies, and were about 1 1/4" in length including their legs. Others were itsy bitsy, with a total length of less than 3/8". Their eyes, however, reflected the same amount of light.
Taking pictures didn't work all that well. Here is one attempt: 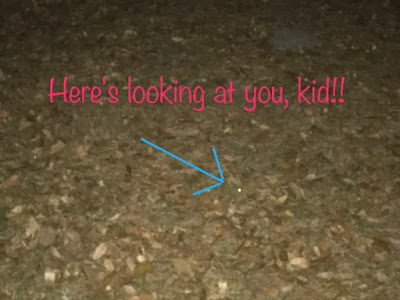 You'll have to try it yourself. If you don't have a "miner's light" hold a flashlight on your forehead, just above the bridge of your nose. Do you see what I saw?
After leaving the dog park I kept checking the surroundings. On this particular evening, I discovered there were more spiders in the grass than I had seen in the dog park. Oh. No. They're everywhere!