If you are one of my blog followers, you may want to skip this post. It chronicles "old lady" issues I have been experiencing and is basically pretty boring. However, I wanted to put things down in writing because the other "old lady" issue I experience is that things get a big foggy when it comes to details. I figure by writing this down it will give me some baseline data that I may need to reference in the future!

I have been struggling for over 6 months with a hamstring injury. Last spring I began to notice an ache, some pain, along the back of my right leg when I played pickleball. I thought it was simply a matter of being out of shape and it would correct itself with more exercise. By July, as the pain increased, I came to the realization that it was not the case. I gave up playing. (If I'm not playing pickleball, things must be pretty bad!) I stopped walking. I babied my leg. I used ice. I had some chiropractic visits that included suggestions for exercises to perform at home. I did the exercises. I began walking, increasing the time on the trail slowly. It was beginning to feel a bit better. I was beginning to feel a bit stronger. I volunteered to help at a Beginning Pickleball Clinic around Halloween. The first day went well. It was great to be "back on the court" even though I wasn't really playing, but was merely demonstrating and watching others play. On day two a fourth person was needed to play. I didn't even think about it, and went out on the court. Things went well until a ball was headed out of bounds. I lunged for the ball. The muscle said, "Hell, no!" and I was down. And so began another round of RICE: rest, ice, compression and elevation. I limped along and finally got a prescription for physical therapy after Thanksgiving. The therapists were wonderful. Knowing that I was heading out of town on an extended trip they fast tracked the program, providing practice and printouts of exercises to conduct on the road. My goal was to be "Pickleball Ready" when we arrived at the RiverBend RV Resort in mid January. As we traveled across country I did exercises while I sat in the navigator's seat. I did exercises as I prepared dinner. I did exercises after dinner. I stretched every morning. The ice bag was used liberally. The pain was slowly receding and I could feel that I was getting stronger. When we arrived at RiverBend I slowly incorporated pickleball in my daily activities. I used a compression brace around my thigh. Whether it truly helps is debatable, but I figured it might remind me to take it easy. The first week I played one game each day. The second week I added another game. The third week I played 2 or 3 games depending on how I felt. Along with pickleball, I participated in a PiYo (pilates/yoga) class. It was too demanding, so I concentrated on portions of the class that didn't tax the hamstring. I enjoyed line dancing classes. I walked the dogs, and I began to add a slow jog, 20 - 30 steps at a time, with walking breaks in between. I felt great. The hamstring ached now and then, but there were no sharp pains. When I jogged I noticed an ache along the top of my right hip. It felt like a muscle was a bit sore, but it wasn't debilitating. It made me think I was doing the right thing, getting exercise, even though things were a bit sore. Then, one night I jogged a bit further. I felt great until.... pop! I felt a sharp, searing pain along my hip - just a few inches below the top of the hip and toward the back. And so began the RICE routine...again! A few days later we moved to Lady Lake, FL where we had reservations for a month. Our RV site is up on a hill overlooking horse arenas. Walking down the hill was alright. It hurt, but not terribly. Walking up the hill was torture. Every step with my right leg brought a lot of pain. Walking up steps with my right leg was next to impossible. For a while I adopted a double step approach: step up with the left leg. Bring the right leg up to that step. Repeat. I decided to seek help immediately so that maybe I could get back into gear sooner. A friend in the campground recommended a health center with chiropractors, DO's, physical therapy and PA's. On my first visit we determined that I had injured the gluteus medius, a band of muscle  that runs from the head of the femur up to the top of the hip. 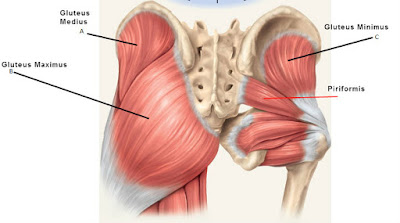 Despite the fact that I opted to go to a health center that focuses on chiropractic and bone stuff, I need to go on record as being a "chiroskeptic". I have often thought that Chiropractors are right up there with witch doctors and palm readers. However, I have been pleasantly surprised. Dr. K has spent more time focusing on my muscles than on the alignment of my bones. He could immediately tell that my hamstring has a lot of scar tissue, and thus is shortened and weaker. Because of this, my leg hasn't moved the way it should, and stress has been put on other muscles, which caused the G. Medius to squawk. Dr. K also knows exactly where the trigger points are where the muscle is in spasm. Holy cow... how does he know to press... right... there... where it almost makes me cry?! The pain when he presses stabs me at those points is almost more than I can tolerate. It seems that the Gluteus Medius has probably had issues for quite a while, it isn't a new injury. Today it was recommended that I have TPI, trigger point injections. They inject lidocaine directly into the muscle in spasm to help it relax. The injections hurt far less than trying to massage the knotted muscle. I will have to go back to have some repeated injections, but it is hoped that after several rounds the muscle will relax and the pain will go away. Here's hoping!
So, now I am back to ice packs and exercises. It is tough getting old!


Another thought, are the two injuries related? Does a connection exist between the plantar fasciitis I experienced in 2016 and the hamstring?
at March 03, 2017