Today I visited Mesa Verde. Although I have been here twice before, I saw so much more than ever before by taking two different tours. In the morning I trekked down to Cliff Palace. And... what a trek it was!

First, we wound our way down steep, narrow steps: 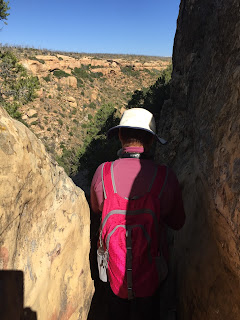 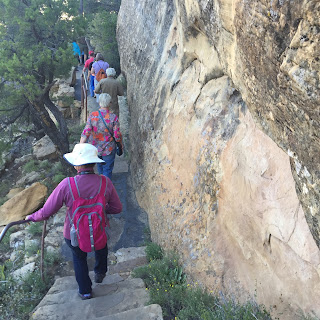 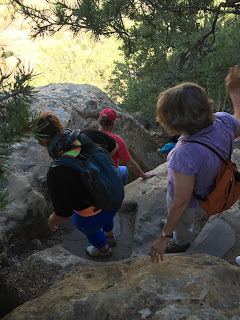 The path wound around boulders and through crevices 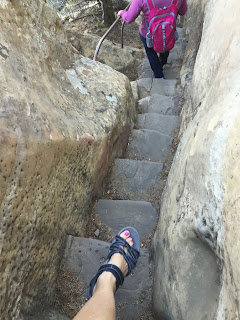 Then, once we went down and around, we went back up! 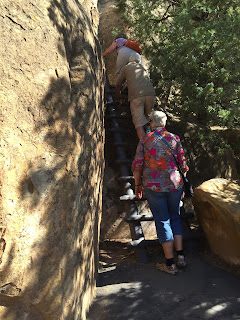 The view was breathtaking. 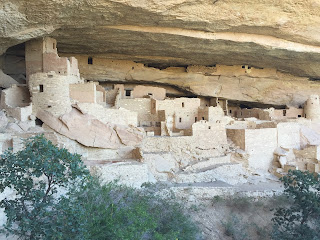 It was amazing to think that hundreds of people lived
in this "village" around 1270.

Do you see the white plug on the underside of the timber?
That is a patch covering the area where a core
was taken to date the age of the timber used for framing. 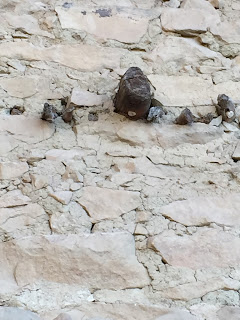 The buildings were made over a period of 30 years.
Some used rough stones.
Others were more like bricks.
Some of the walls were smoothed after they were built,
and covered with a dirt "plaster". 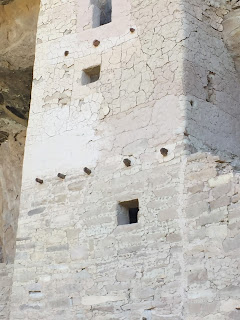 The gaps were filled with a mud plaster,
and then chinked with small stones for
added stability. 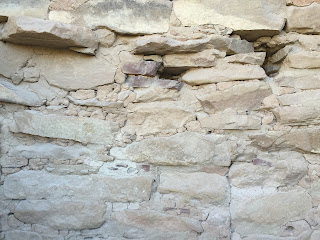 Kivas are found in almost every dwelling area.
They are dug into the ground and have a slightly rounded
roof made of logs and dirt.
Many think the Kivas were ceremonial rooms.
Others think they were multipurpose rooms,
somewhat like family rooms of today. 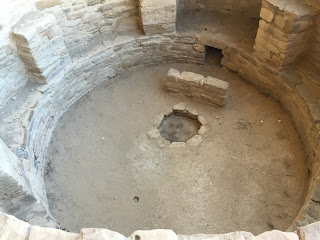 Access to the kivas was usually by means of a ladder
placed in the central hole where smoke also escaped.
Fresh air came into the kiva from a hole placed near the fire.
The air was diverted around the fire pit,
which caused the air to swirl around the room,
moving the smoke to the top.

Some kivas had tunnels leading to other rooms. 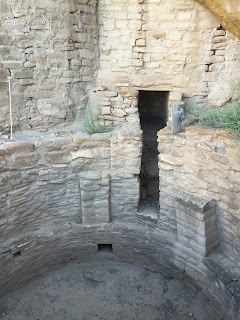 The Cliff Palace had more than 150 rooms.
Some of the rooms were decorated.
We were able to look up into a tower so that we could
see the painted walls of one room. 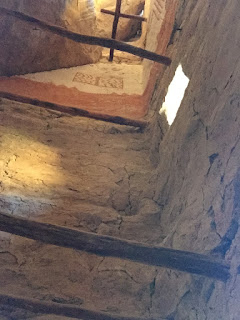 After viewing the cliff dwellings,
and hearing the story from the ranger,
we ascended to the top of the mesa. 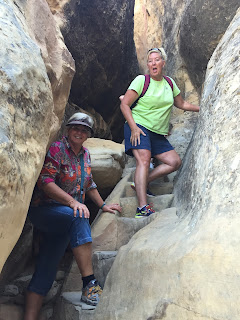 We used stairs and ladders.
The Indians used hand and footholds carved into the rock. 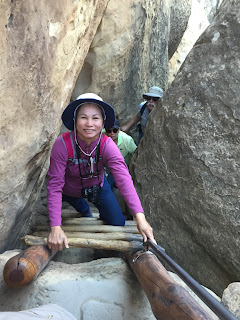 The second tour was the "700 year" tour. The Ranger took us to different areas giving us a chronological look at the development of dwellings in the Mesa Verde area. The earliest homes were dug into the earth along the top of the mesa around 550 A.D. They had an earthen roof. Later developments included venting for circulation and smoke exhaust, similar to that of the kivas from later times. Eventually the homes became more like pueblo structures. They were built at ground level and some had several stories. Then, construction moved into the grottos found among the cliffs. The ancient Puebloans left the area around 1300 A.D. for unknown reasons. It is suspected that years of drought may have forced them to move to areas with more water for their agricultural needs. No one knows for certain.