S to the Fourth Power

Sifting
Sorting
Selling
Storing
That has been our work for more than a month as we cleared out the house we have in California. This was just a "sometimes" house, and because of Covid, we had not even seen it for well over a year.
How can two people accumulate so much stuff in such a short time of ownership?!
We sorted things into several piles:
Go to Florida
Store in California
Sell
Give away
Throw away
Going into this I had a few options for selling some of our unwanted furniture:
I found a company that will charge for the space your stuff takes up in their truck, then haul everything away. What can be sold is taken to a resale shop, and you get 50% of the selling price. What can't be sold is donated or tossed When I connected with them, sending pictures of everything we had to get rid of, they said I'd use almost an entire truck (obviously they have never seen me pack!!) and only offered to sell about 8 items of the 35+ I sent to them. Then, they added on the "disposal fee" which was more than the fee for the truck. Forget that!
Our realtor knew of a company that would buy your stuff for pennies on the dollar and pick it up for free. I had to submit pictures of everything, because they would not visit homes due to Covid. They agreed to buy my furnishings for $500, and pick it up for free. Hooray! Then, one of their workers got hurt and they stopped picking up furniture. Oh, no! (My words may have been were a bit stronger!
I connected with a few other companies that would pick up your "junk" for a fee. Three were willing to come, but not until several days after we had to be out.
Thence began a marathon session of posting pictures and descriptions on FaceBook Market Place and Next Door...and answering hundreds of inquiries...and giving out directions...and hauling things to cars...and getting rid of things. It was an onerous task!
We took numerous loads of stuff to thrift stores, and began to cart what would fit in the rental car to storage, to friends or to family. We arranged for a Uhaul U-box to be delivered...and put everything destined for Florida in it, locked it up, and watched it get loaded onto the bed of a truck. It will be stored in Florida until we are ready for it to be delivered to our home. 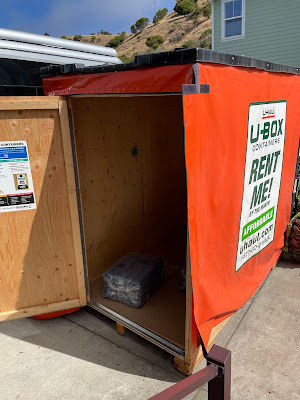 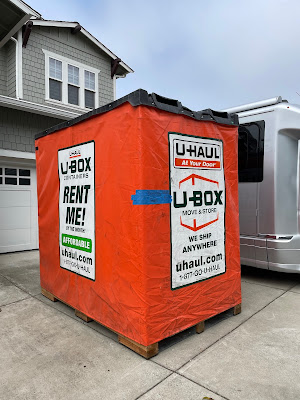 We contracted with "Ben the Mover" to help us. He brought a truck and two amazingly strong workers. They loaded all of the remaining furniture destined for storage - at some point we do intend to get a condo or a small home close to the kids - and they deftly packed the storage unit we had rented. 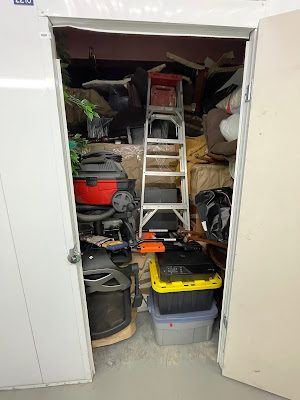 They returned to the house and cleared out everything else. You know what I'm talking about! The old mattress, the extra packing paper and odd bits of bubble wrap and cardboard, furniture that just wouldn't sell, furniture that wasn't worth selling, and odd bits of this and that. When they left the house was empty.
We camped in the driveway for two nights as we tidied up the yard and visited with the kids and grand kids, and then turned our wheels toward new adventures! 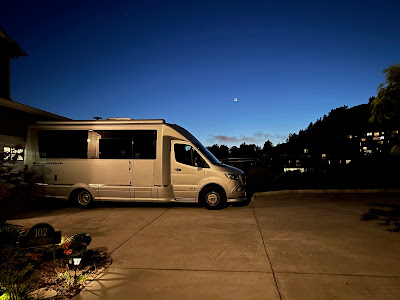