Disclaimer:
No animals were maimed, damaged, cut, burned or tormented (well maybe a little) in this experiment.
No animals were denied affection or food in this experiment.
A friend posted a video on FaceBook showing a cat and several dogs negotiating a pathway among a marker and pen landmine. The cat negotiated the obstacle, with little or no hesitation, much like a pinball, taking different paths, but knocking down nary a pen. Each of the three dogs balked at the obstacle and eventually came through, knocking down one or more of the pens. It was entertaining to watch the dogs and how they reacted.
I was curious about how my own dogs would handle this test, so set up a carefully planned scientific experiment!
Title: Tiptoe Through the Tulips; How Two Dogs Negotiate a Path With Objects Standing on End 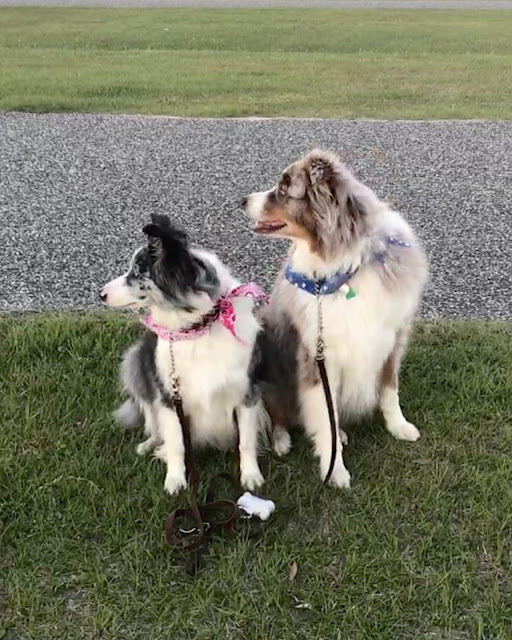 Hypothesis: Tucker, the bold Australian Shepherd, will not hesitate. He will negotiate the barrier, knocking down many of the pens. Gypsy, the Border Collie, will hesitate to study the situation, but will then pick her way through the barrier, knocking down no pens.
Materials:     30-40 thin, cylindrical objects such as markers, pens or pieces of tubing.
A passageway 3 - 4 feet across
Procedure: Remove the test subjects from the area. Place each cylinder on end, about six inches from each other, covering an area in a hallway that extends about 4 feet in length.
Data:
Results:  Tucker would not cross the barrier. Gypsy crossed the barrier with no hesitation.
Conclusion: My hypothesis was incorrect. The "bold" Aussie was a chicken and never attempted to cross the barrier despite having me, and his pal, Gypsy, welcoming him. Gypsy did not hesitate, and although pens were knocked down, were it not for her fluffy tail, that might not have been the case.
Gypsy
Tucker