We went on a farm tour in Hendry County, FL. This is an annual tour sponsored by the Cattlemen's Association and the Hendry County Extension Agency. The tour is intended to inform people about agriculture in the county and the state. This year there were four buses full of curious people on the tour. Some were "city folk" others were farmers from many northern states of the country. We learned a lot! First, we learned that the county where we live ranks first in citrus production in all of Florida. The county ranks 2nd in sugar cane production, fifth in cattle production and third in produce. Florida itself is second only to California in vegetable production and produces over 63% of the total US citrus production. And the biggest surprise.... Florida has more cattle than Texas!

The buses took us through the fields where we could see agriculture happening. Well, since our weather had been unseasonably cool, there was a lot that wasn't happening! Farm owners stepped on the buses and provided commentary about what we were seeing. We also had Extension Agents telling us about many aspects of agriculture.

Here we are in the middle of some sugar cane fields. Each square is about 40 acres. 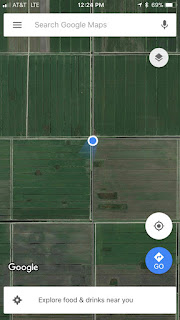 The fields we visited were just the tip of the agricultural iceberg! 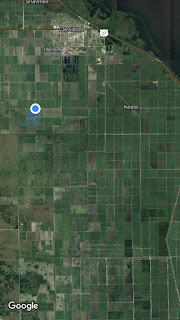 I found it fascinating to see the preparation for planting. These are newly planted rows of beans. The soil here has a bit of clay, so it stays formed after the special tractor goes through forming and planting rows in one operation. Two different farmers talked about how poorly beans were doing in the cool, cloudy weather we were experiencing. 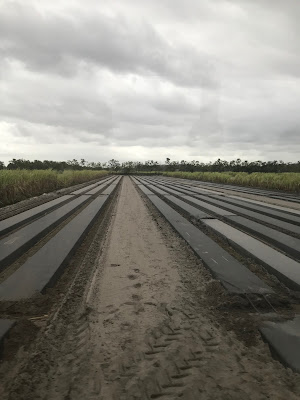 Beans are one of the crops that can be picked mechanically. The equipment has revolving brushes that sweep the beans off of the bushes. 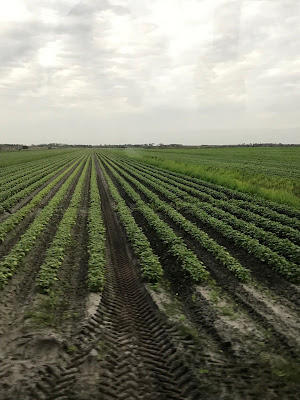 Rows of crops are placed between large irrigation ditches. When plants need water the water level in the ditches is raised and the plants receive their water from the rising water table under the soil. In the picture above you can see what looks like a horizontal break in the rows. The perfect rows are cut across at different points to allow rain water to drain.

The corn was also delayed. Normally the corn tassels would already have been cut. They have large mowing machines that cut the top tassels off so they aren't in the workers faces when they pick the corn. 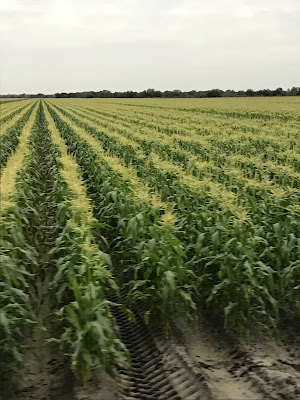 The sides of this trailer fold down. Workers stand on the platform picking corn as they are pulled through the rows. There is a conveyor in the middle that feeds the corn into trucks. Most of the Florida corn production is for human consumption. The farmer strives to produce corn that is consistent in size, about 7" in length, as that is what the US consumers demand. 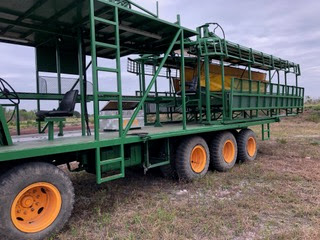 In the distance we could see smoke from burning sugar cane fields. The fields are burned before harvesting. The fire burns off all of the leaves and all that remains is the cane. There are mixed feelings about burning the cane fields. On our trip to Hawaii we learned that sugar production was ceasing there as the ash and poor air quality impacted tourism. The cane fields in Florida can only be burned if the wind will blow the smoke and ashes away from the large east coast cities of Palm Beach and Ft. Lauderdale. The agent claims that the increased cost of processing the cane, and the problems with disposal of the unused plant material, make burning the only practical manner of processing. 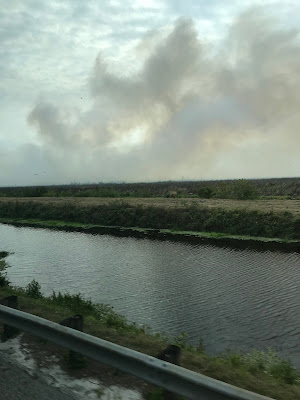 To the untrained eye the sugar cane looks fine. However, the Extension Agent explained that Hurricane Irma blew the stalks over. In the weeks after the storm the cane did not come back upright. The subsequent growth turned up, so 3-4 feet of cane is lying along the ground. Normally the cane is 12-15 feet high at this time of year. It is only a few fee over our heads. 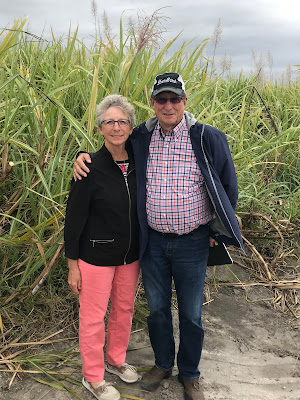 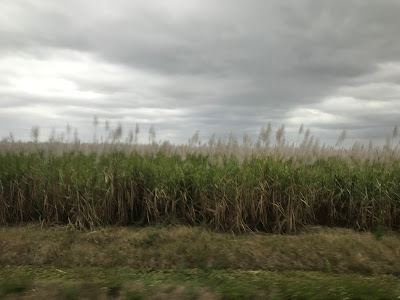 The agent takes measurements and surveys the cane for pests and disease. Because of the mess made by the hurricane it is impossible for him to get into the fields. 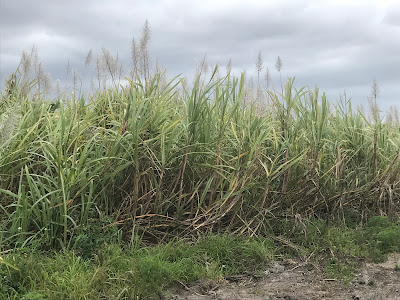 Unfortunately we did not get to see cane being harvested. Once the cane is burned, a machine with large "combs" enters the field and then cuts the cane as it is caught in the large prongs of the machine. This year the machines are struggling with getting all of the cane that is lying on the ground. The machine looks like a dinosaur (on the right in this picture). It spits the cut cane into a truck. 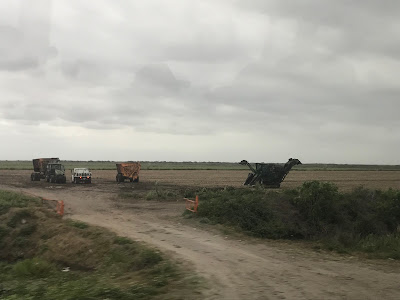 The large trucks full of cut cane travel to a raised platforms where they dump their loads into train cars. Yes! Their are rail lines through the cane fields. The lines go to the US Sugar Mill in Clewiston, FL where the cane is turned into sugar. 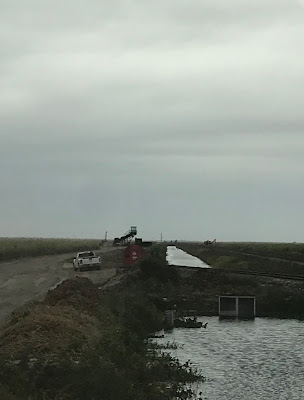 Sugar cane is related to grass. Once it is cut it will regrow. Each field can be cut for about 3 years before it is recultivated and planted. New plants are propagated vegetatively from cuttings. Fields are replanted with pieces of cane which will produce "pups" and roots along the cane.

We also learned about the "Cow and Calf" industry in Florida. The cattle, at least in this area of the state, are predominately Brahman mixed with a bit of Black Angus and some Charolais. The Brahman is better suited to thrive on grass living in high temperatures and they can better withstand the assault of insects. The other breeds help produce better steaks! It is less expensive to ship calves to feed lots than it is to bring feed to the calves, so in the spring the 500-600 pound calves are shipped off for finishing. 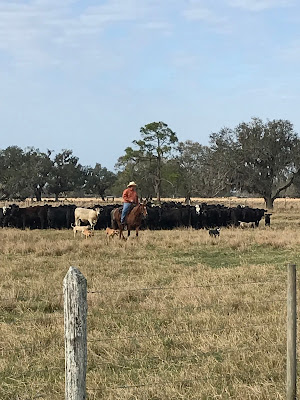 For the tour, one of the ranchers brought in a herd of cattle and shared information about his cattle. While he talked his dogs literally ran circles around the bunched cows. The dogs have descended from a long line of ranch dogs and are now called "Florida Cur Dogs". The rancher explained that the mama learned from her mama and she teaches the pups the behavior. The dogs are not used to drive the cattle from place to place, but will bunch them and hold them.

Our last stop was at a produce farm. We drove through fields of cabbage, both red and green. 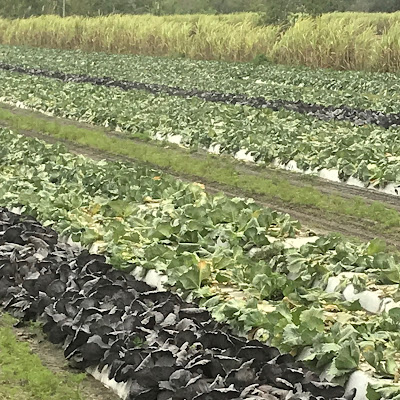 As we progressed through the fields we came across an area where the cabbage was being harvested. Immigrant laborers are brought to the US on very specific contracts which state that they may only be employed for a specified period of time, harvesting a specified crop. The Government sets a minimum wage and requires that housing, medical assistance and transportation be provided. The farmer said that many of the laborers will earn in excess of $20 per hour if they are hard workers. He also pointed out that we would see no white workers, as they won't work as hard.

The workers use sharp machetes to cut the cabbages. I was amazed at the speed with which they fill boxes. I timed one worker at 35 seconds. In that time he opened a carton, filled it and put his initials or number on it. The laborers leave a lot of inferior or damaged cabbages in the field. It is sad that so much produce is left to rot, but the farmer pointed out, we Americans are very picky about our food and won't by a cabbage head that is too small or too large, or one that is cracked or has insect damage. It is a shame that we can't find a way to harvest the unpicked produce for our poor communities.


These boxes represent just over an hour worth of work. 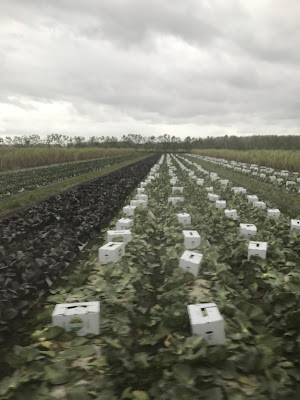 After driving through the fields we arrived at the processing plant. It was a beehive of activity. There were fork lifts moving back and forth carrying stacks of produce. The farmer had much of what they were packaging that day on display. There were several kinds of egg plant, herbs, radishes, squash and Bok Choy. 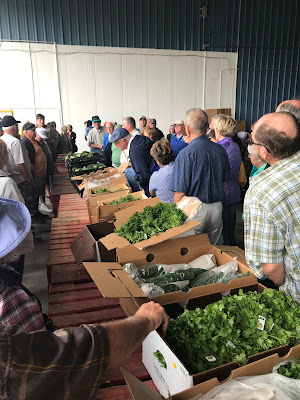 The farmer talked about regulations that govern his work. He has some areas where he produces organic vegetables that require even more oversight. He also shared that packaging is especially expensive. The boxes are close to $2 each. Those that he ships to New York markets need to be in wood crates as the consumers associate that with fresh picked vegetables. Walmart requires the use of plastic crates. Although they are reusable, he must go through an agency that cleans and sterilizes the crates between uses. The farmer also talked about the impact of electronic logs for the trucking industry. Truck drivers can no longer drive longer hours than they report, so shipping will take longer and will be more expensive. The positive side of this for Florida farmers is that Florida produce will be fresher when it hits large eastern cities than produce from Mexico or California. 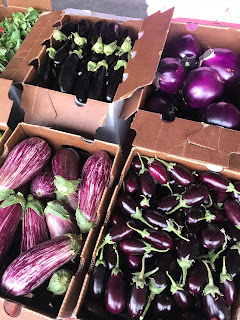 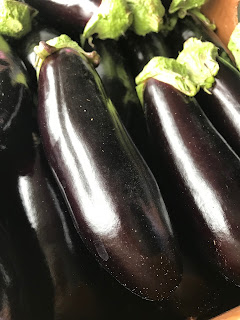 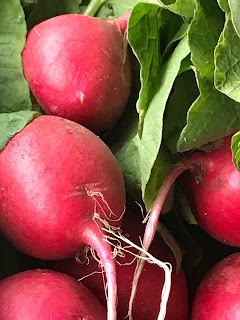