I find it interesting to see how the pieces of a puzzle come together....

The first piece of the puzzle was the plastic I had taped over the hole leading into the hay storage area of the barn. It had been shoved out of place.
"Darn...(well, the words were a bit stronger than that)!" Dreaming commented to no one (or at least she thought it was no one.) "The *#&*^%) pigeons have been trying to get in there to nest."

The second piece of this puzzle was the dead mouse. I have had a huge mouse problem in the barn, so seeing a mouse was no big deal. But, a dead one? Gypsy had it. She had shown renewed interest in peering intently into the hay and sticking her nose under the hay pallets. Had she somehow caught a mouse?
"Hmmm," Dreaming thought to herself, "a mouser dog. Ain't that something!"

The third piece of the puzzle were the tracks. After our first storm I saw muddy tracks in the snow. Sure, the tracks could have been bunny tracks. Lord knows, we are overrun with the little critters. But, I saw the prints from four distinct pads. Usually the prints from the bunny rear legs show their whole lower leg.
"Well," Dreaming thought, "maybe bunnies 'tip toe' through the mud and snow."

The pieces came together when Mr. Dreamy asked if I had seen our "new cat"! He saw the cat outside the barn. Just a quick glimpse, but enough to fit all the pieces of the puzzle together. We have a new barn cat!

I've named the cat Stormy, since we first actually saw him after one of our big snow storms. He is very elusive. We also call him the ghost cat. I've put food and water out for him, trying to encourage him to stick around. I've found bits of kill here and there. He is a good barn kitty! He is totally feral. We've seen him from a distance, but I've only seen him up close one time when I cut the baling twine on a bale of hay that he was hiding under. I only saw him for an instant as he took off in a flash!

It will be interesting to see if he ever gains trust in us.


Our one photo of Stormy, taken with a looonnngggg lens!
Proof positive! 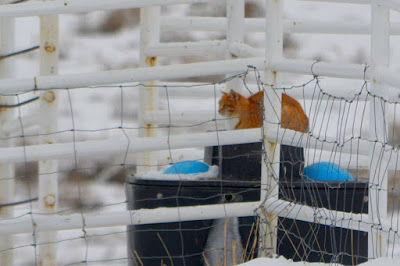