We didn't quite make "knee high by the 4th of July", but we came close! Perhaps if I were a bit shorter….
Do you see my elephant? I first put him in the same spot I had him in the previous photo (taken a mere two weeks before), and he was lost. I think I heard him trumpeting for help in negotiating his way out of the jungle rain forest. 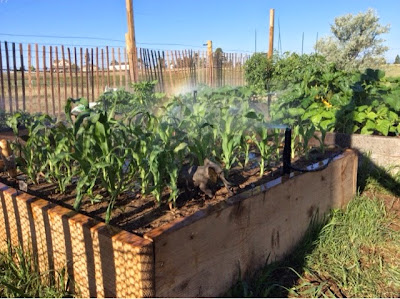 We have an irrigation system!! Woohoo!! I am dancing with joy. I am so tired of dragging hoses all over the place, and then trying to get them back in a nice, orderly coil. To water the trees in the back yard one needs almost 200 feet of hose. That gets heavy when water is in it!

The irrigation system isn't exactly new. When we bought our home, which had been vacant for over two years, we found a variety of systems that may or may not have been functional. The irrigation system was one of those. We could see that several pipes and valves in the manifold were cracked, and we noticed many pipes in the gardens around the house that had been chewed up by critters. We knew from previous experience that the manifold valves were very expensive. We wrote the system off, and proceeded to haul hoses around and use sprinklers as needed… until now.

We invited several irrigation system companies to come by and assess the situation. The fellow we selected seemed to like the challenge of seeing how much of the existing system he could use. Within a few hours he had 4 of the original 7 zones working! Wow! Were we ever surprised… I think he was surprised, too! It didn't take too much time and our system was up and running. Hooray!